Chapter 11: After The Long Hungry Winter

On their way to Mass through the brisk air, a bit of color greenin’ the countryside, John and his brother Andrew continued talkin’ about another possibility beyond the workhouse though John had not mentioned it to Johannah, at least not yet. 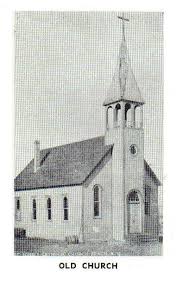 “Did ye talk to Johannah about the ship, and the poorhouse and,” Andrew whispered in John’s ear, lookin’ back at the women and kiddies followin’ them down the lane.

“Nay, I haven’t. I can’t be getting’ her hopes up. She’d never let it go, she wouldn’t, if I told her. She’d start the day with a when and go to sleep askin’ what the plans were, and what should she be adoin’ to help me. So I canna be tellin’her ennathin’ till the plan is finished. Until I knew for meself what we’re agoin’ to be doin’.” Even as John whispered those words, he wondered if that’s all they would ever be – a hope, a dream.

“Have ye heard how some landlords are chasin’ their tenants off the land, those what are starvin’ already and who canna pay their rent.” Andrew paused as he looked into his brother’s eyes. “It’s time we faced the fact that payin’ the rent is no guarantee of a roof over our heads. Billy Mackey told me some English landowners hired brigands to be chasin’ off families, widows with children, even some of those who could and did pay their rent. If the Irish wouldna’ go because it was not right to force them off their paid up land,” Andrew added with a fierce anger punctuatin’ every word, The ruffians would be tearin’ their houses down, starting with the roof and even the walls and lighting a fire to the thatch.” Again he paused, and lookin’ at the ground, “I heard about a family dyin’ in the fire of their burnin’ house, and no one doin’ ennathin’ to help ‘em, the while hearin’ the screams of the dyin’.”

John took hold of Andrew’s arm as they turned up the last steps to the church whispering, “Shut yer gob now. We’ll be talkin’ more later and I won’t be scarin’ up the women with yer fierce words just now.”

But John knew there were some few who had chosen another route. He heard the boyos at the market talkin’ about how it was cheaper for them, the English, to send their tenants off to Canada, to Americay or Australia than to the poorhouse. John knew the lads were tryin’ to stir up trouble when they continued shoutin’ so loud all the folk at the market could he hearin’, “They be sayin’ the landowners have to pay a tax to support those what live on their land, that it cost them half as much to send the Irish off on a ship where most of them be dyin’ than to support them for a year in the poor house. So they’re sending some few away, and some they’re just drivin’ away, not even payin’ the poor house rate for them. They be sayin’ the English are just after makin’ more money on the backs of the Irish.”

Thoughts whirled in John’s head makin’ it nigh onto impossible to focus on the priest words. John had heard but said nothin’ back at the market, his mind stirrin’ about Andrew’s words and then racin’ back to the conversation at the market. Was it fear what kept him quiet. But he knew it wouldna’ helped nothin’ to say even one word. He knew the English would be comin’ for him and his family soon enough, at least for their house. It didna’ seem like the prayers the priest poured out over their heads did a bit of good. John, and none of the other farmers still couldna pay the rent and put a bit of food on the table.

John knew those what leased a bit of land from him had no way of puttin’ away their debts. He had heard too the English made more money usin’ the land for pasturage than for housin’ the Irish. So that was that. John couldna pay the rent much longer because those he had let his own acreage to couldna pay him.. Not even his own brother had a penny to pay toward his rent.

“Take care of the land,” his father Andrew had said. “Take care of the land and yer brother,” just before he had breathed his last.  Ten years it had been, since John, the eldest son, had taken over the allotment as was expected, as was his right. Back then John had worked already at the manor, tendin’ the gardens at the house as a lad and later, havin’ worked hard enough to earn some respect, they put him to work overseein’ the plantin’, the harvestin’ of the barley fields. T’was John then that followed the barley from the field to be carted off to be turned into ale. Brother Andrew followed John to work at the manor, and it was only natural for him to be raisin’ his family there with John, helpin’ a bit with the rate at first. Before the blight.

But with the hard times, John had let off an acre or two and finally even a half acre knowin’ the while the poor man who could afford nothin’ larger couldna’ feed his family from a half acre. But neither could John hope to feed his own family if he did not find another renter. And now, now, none of the his renters had seen a coin of wages in so long, he told himself, they forgot what a coin looked like. The renters had nothin’ at all while John still had some money, that wee pile of coins hidden in a cloth in the back of the loft.

Instead of coins now, John and Johannah and Andrew and Mary and truth be told, everyone else they knew bartered, a bit of butter or an outgrown coat for some turnips when there was nought else to be had. Still the English wanted coins for their oats, even though there was enough oats and wheat and barley to be shippin’ it away from Ireland. John had begged the Blessed Virgin to send them to Amerikay, more than once he had. He made the sign of the cross again as he remembered and findin’ himself joinin’ the rest of the churchgoers makin’ the sign with the priest, the mass endin’.  Even if they called the ships Coffin Ships, John thought, because so many died on their way to hope, finishin’ his thoughts. He had to try summat to save them. And he wondered what the priest had said, so far away in his own head he had been.

Mass finished, the brothers felt duly chastised as they walked out under the cloudy sky, “Do you know what they’re saying?” John leaned over to his younger brother Andrew. “I heard the boys are gathering again for, ye know, evenin’ the scores. And look there, who our boys are followin’. Always lookin’ after the bigger lads, aren’t they?”

Andrew looked over where their boys, scarcely more than bairns in his mind, stood, hangin’ at the edges of the circle of older boys in the road. “And so they might. We both know that happens every few years, and aye, it is about time for it to explode again. These boys have no sense of the history. They’ve only sense of the hungry and the ..”

John interrupted him, “You’re right, the hungry and the injustice of it all. And soon they’ll be runnin’ off with our pistols and pitchforks thinkin’ they can be heroes and right things.” John paused, his voice growin’ lower and sterner. “You know it’s not the big boys that matter to me. It’s the wee lads that listen and think it’s a fine thing the big boys are doin’ and thinkin’ that they are big enough to join them. And the next thing ye know…”

This time it was Andrew that interrupted, “Ah, and ye are dreamin’. Our boys, look at them, they’re hardly separated from their mas and ye can’t be thinkin’ they’re ready to die, because that’s what will happen to those other lads. The English come in with their soldiers and their weapons and our boys always end up dyin’ by the road or hidin’ in the hills.”

“That’s what ye and I know. We’ve seen it all our lives, but our wee lads haven’t even had much of a life yet. And war, and playin’ war is always more excitin’ that scrabblin’ through the ground for taties or followin’ after the chickens or milkin’ the cows. So what are you sayin’? We have to warn the wee lads about followin’ the grown ones, or the ones that think they’re grown? That we have to hide the pistols and pitchforks?”

“No, that’s not what I’m sayin’. It’s just that I want better for me boys, and me girlie, and I don’t think there’s much hope for that here. Not for ye and me and not for our families. People have been leavin’ Ireland since I was a lad.” John twisted his hat in his hands. “I’ve been thinkin’ about the poorhouse.” Then he caught himself, “The workhouse. Have ye thought about it?”

Andrew put his hands on his older brother’s shoulders. “John, how could ye even say the words. I cannna even think them and I can tell it’s hard for ye to.”

“I don’t know about you Andrew, but my tenants are worse off than we are, and I’ve had no rent in longer than I can remember. And besides the cows, there’s not much left for you and me to sell. At least that Johannah would think to sell.” And he leaned in closer to Andrew, “Have ye thought about leavin’?”

“Tipperary?” Andrew whispered back, “Or Ireland? I heard what ye said a moment or two ago. Aye, it’s on me mind all the time. The Lynches got a post from their son whose off to Pennsylvaney in America. He said there’s lots of land and if ye can make your way out of the cities, there’s farmland for the taking.”

“But you’re dreamin’, aren’t ye? First, farm land for the takin,? That’s not what I have heard. It’s a hard life for the Irish. I heard about the posters, and yes, I have seen them promisin’ the grand life over there with jobs and three meals a day, but ye do have to get there, don’t ye? And how do ye think we can do that?” John paused, “And I have heard too, that promises don’t always come true”

“There’s ways,” Andrew whispered back. “There’s ways. Look about you this week. With sharp eyes. Look at our boys. Look at our farms and your tenants. Look at yer taties. And look at the line of boxes filled with our dead children and old people off to the burying grounds. Remember the stink of it all. And then look at the taties we’ve laid away for the winter. Sure and they all didn’t die, but my piles will not last through till the next harvest. Listen to what the children say, even those boys,” pointin’ to the boys with his elbow and scuffin’ the hard dirt at his feet. “Sometimes. it’s just more than a man can take, to watch the bairns, not just mine own, but all the children, the wee ones that lie about the tenant cottages who have less to eat than our own. I’m thinkin’ there has to be a better way. And there has to be some truth to what Billy Lynch wrote his parents. Now be off with ye,” and John headed toward his family waitin, down the road, a few paces from the circle of young lads.”

by a granddaughter of Ireland