“The wretched people were seated on the fences of their decayin’ gardens, wringing’ their hands and wailin’ bitterly the destruction that had left them foodless.” 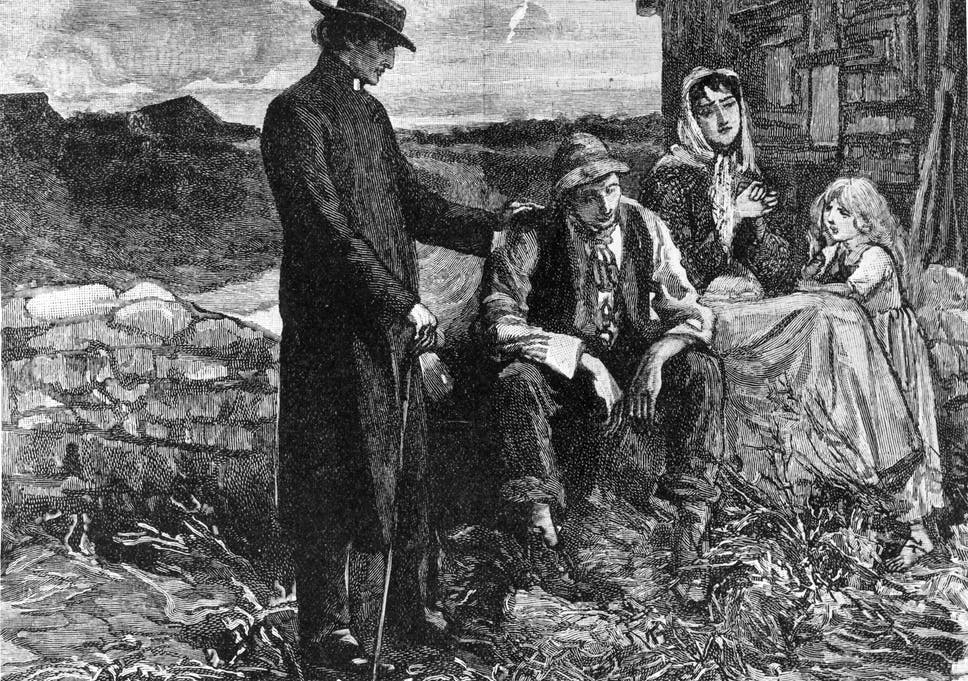 “I tell you Johannah, those were the exact words I heard the new priest, the traveling priest, tell Father Peter at the door after mass. He was tellin’ about the people in Galway, but I’ve seen the same thing here, and t’will only get worse. What can a man do when the food for his family is gone? But what really worries me,” and he scuffed the floor as if stampin’ in the nightmare,” is what the lads who have some work are going to do now that the grain crops are ready for the reaping and thrashing and milling. Once that’s done, they’ll be shipping all that food away to the cities where the English have the money to buy it. Or maybe ship it to England,” and his voice trailed off.

“It’s not just!” Johannah pleaded, “We do the work and we have a right to eat.” She wrapped her arms around John’s waist and buried her face in his shoulder. John felt her tears through the thin cloth of his shirt and patted her shakin’ shoulders wishin’ he could do more. But he knew, he knew, that if anyone got caught stealin’, even if it was so his family might have something to eat, he’d be soon dead. And a dead man can’t care for his family.

“We have taties right now,” he whispered into Johannah’s upturned face, “and I know not a lot of them, but we’re better off than some.” And as his anger simmered, he could feel the muscles in his arms tense. “We cannot lose hope. We have to hold each other up.”

Johannah gave him wee kiss on the chin and said, “Andrew’s Mary told me that they’re riotin’ over in County Waterford. Those men lost their minds and went after the soldiers guardin’ the landlord’s men what was drivin’ sheep to market. I understand, I do. Watchin’ the meat that would keep their bairns alive off to fill English bellies. And …”

“There’s nought we can do about that,” John whispered again into Johannah’s hair. There’s worse goin’ on right here under me nose. Andrew told me the men in Tipperary, from Templetoughy and Moyne are postin’ notices around the village callin’ for meetings to talk about the hunger and the food being taken right away from us. But I know it’s more than talkin’ they want to be doin’. Andrew said that there was notice on the chapel in Tipperary warnin’ us, the men, the farmers and laborers, that if we didn’t show up at the meetin’, we would be ‘marked men.’”

“What do ye think it means,” he whispered. “It’ll not be meanin’ marked for a sack of grain, it won’t.”

Startled by the venom in his voice, Johannah stepped back, lookin’ his in the eyes.

“Now, forget I iver said that. Andrew and me and Philip are meetin’ with the priest when we get done in the fields tomorra. The priest is a wise man. He’ll know what we must do.”

Father was waitin’ for the Brennans as they walked up the path toward the church. Even in the late evenin’ dusk, John and his brothers could see the priest was not alone, and they recognized the Lynches, the Mahers and the Fogartys among the crowd already at the church door and the Quinns and Roes hurryin’ down the road in twos and threes. Once John led his brothers into the church, the rest all followed, silent and worried, they were. And some of the younger men, growin’ angry in their hopelessness.

Father walked up to the front of the church, turned his back on the men to kneel and pray for a moment. As a choir, the men did the same in their pew, crossin’ themselves and waitin’ in the thick silence for Father to speak.

“My sons,” he started. “ I know ye’ve seen the notices callin’ ye to a meetin’. But those what plan the meetin’s don’t care about ye and your families. Night and day I’ve been askin’ the Blessed Virgin to show us the way, and this, I believe, is the way.

I’ve been after rippin’ down the notices, all I could find between here and Moyne and down to Cashel. Now, I’m askin’ ye all to stay at home. If ye be goin’ to those meetin’s, ye know what’ll happen. They’ll be talkin’ loud and hard and wantin’ ye to join them in attackin’ the landlords and the poor men doing their jobs cartin’ the grain and the sheep off to market. Ye’ll end up killin’ yer brothers and callin’ the English soldiers on us, givin’ them reason to kill,” he paused, “not just us but yer women and yer children. But ye know that in yer hearts, don’t ye?” He paused again to give the men time to process his words and give some sign of agreement. “So go home. I’m askin’ ye to go home and do yer work, and stay away from the meetin’s.”

The men sat frozen for a moment in silence. They knew Father was right. Too weary to think of a response, they rose and like a flock of hopeless sheep, moved down the aisle into the darkness.