At the table, but then we did not eat at the table. It was so beautiful that we loaded up our plates and found places in the half circle of chairs near the lake’s edge in the shade of a great willow.

As I planed the luncheon, I tried to think of all the possibilities, arranging coordinating placemats and cloth napkins on the picnic table, but arranging on a nearby cloth-covered table plates, both Corelle and disposable, paper napkins and both metal and plastic flatware. My theory was that if we sat at the lake, maybe people would like the plastic and paper, but if we used the picnic table, the heavier stuff might be nice. Silly me, I carried all the unused Corelle and metal flatware unused back inside later. A picnic is a picnic! So there, and the disposable stuff works just as fine in a tiny house as in a giant house. And we spent the afternoon, down near the water’s edge. 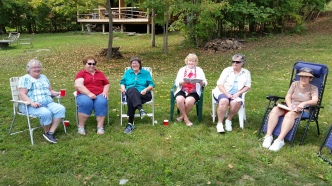 Obviously cooking in a tiny house differs from that in a large kitchen, but you can still do much the same menu. I made a black and white bean salad, a Lebanese cucumber and tomato salad, and a chicken salad with orzo pasta, grapes, celery and slivered almonds.

And for dessert, my rectangular crockpot hit the nail on the head. I made that pumpkin dessert I posted recently, but I did add a half cup of brown sugar and a tablespoon of pumpkin pie spiceto the pumpkin layer.  A dollop of ice topped it off, and Jim ate the last little piece as dessert for his breakfast…and no, breakfast is not normally followed by dessert.

This morning I mixed a can of cherry pie filling with a can of berry pie filling and layered that in the bottom of the crockpot…covering it with most of a package of yellow cake mix and two sticks of butter, sliced up. And about a half cup of chopped walnuts. Two and a half hours in the crockpot on high, and then I will let it cool for a couple of hours and it will be ready for today’s company.

Last week I made zucchini lasagna in that crockpot – same lasagna recipe as usual, just the

zucchini slices for regular noodles. I let it for about seven hours on low, but I am not sure it needed that long.

All of that to say, it was a great day at the tiny house and I am looking forward to the next brave souls to journey down our road for a visit.

One thought on “We were seven!”