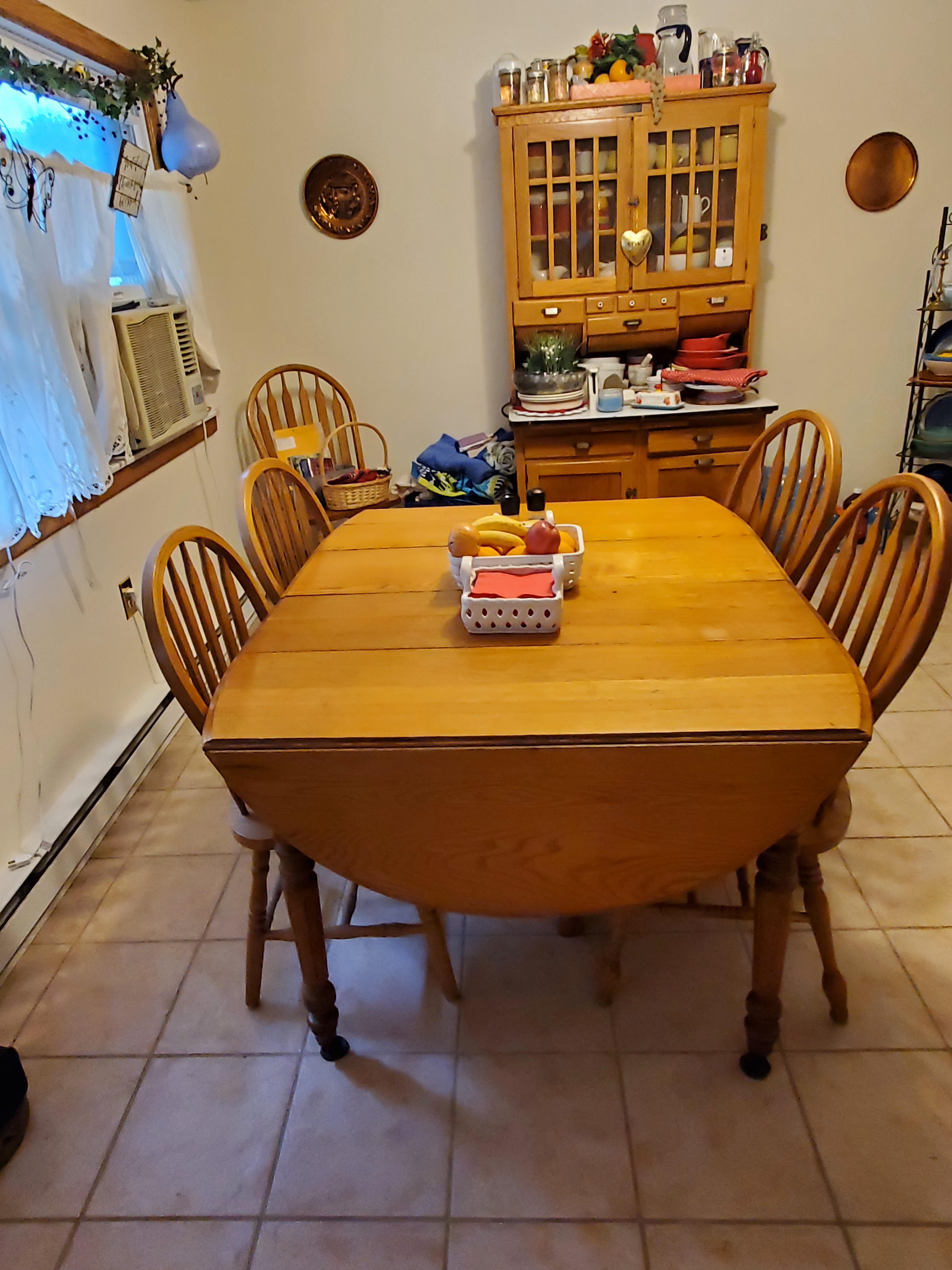 She hadn’t taken off her magenta coat nor closed the door nor even really looked at him, but the words, the ones he hardly ever listened to, fell out of her mouth. “I was down at Maud’s walking along the creek when it started to rain, and she said we could wait it out in the barn. She was showing me some old furniture been sitting in there since her parents died when it stopped raining and a piece of sunshine came in from the wall where there was a board missing when I saw it. First, it looked like just a pile of old oak. But it was like the sunlight drawed me over there, and those old oak boards turned into what was a table once upon a time. So I asked Maud if she was going to do anything with them and she said no and I said could I have them and she said yes. Now they’re out there in the car.”

He put a paperclip in his book and laid it down on his desk next to the cigarette roller. “What’s that you said? I didn’t hear it all.”

“I said,” she said drawing out the said in exasperation, “Maud had pieces of an old oak table out in the barn, and she said I could have it, so I brought it home. Thought you might be able to make something of it.”

He never even put his jacket out nor said much, just went out the door, slopping wet tracks over to the car and opened the door. At first, he was bewildered. It looked like the backseat was just full of old blackened boards until he saw one, then another that wasn’t flat, but spindle-like, as if they’d been worked on, as if, he thought, they might have been the legs of a table. Maybe she was right. Maybe, this had been a table once upon a time.

He got in the car and drove it out to the barn where he slid the door open and pulled the chain to turn the light on. Then, an armful at a time, he carried in what he realized were legs, pieces of the original oval oak tabletop, the flat curved drop leaves, and more pieces he figured had been extra leaves. After he laid out the pieces on his work table, he pulled the chain turning the light off, pulled the barn door shut, and went back out to move the car back to the house, all the while thinking about what he would need to turn these bits and pieces into the thing he could already see in his mind. A useful table, seemed like all the parts were there, maybe something they could put on the back porch for ripening tomatoes or letting potatoes dry on. That would be better than on the plastic and newspapers he used now, and easier on his back. He wouldn’t have to do so much bending over.

No sooner than he got back into the house, she started in, like he knew she would. “What do you think? Maud said it must have been in the dining room before that table got all broke up. I told her you could fix it. If there’s anything you can do, it’s fix things.”

”Now you go on about fixing dinner,” he shouted, more because he had the hearing problems than she did. “I got some thinking to do before I figure out whether I can do something with those boards.” He went back to his desk, rolled another cigarette, and looking off in space began planning. He’d start with the legs. If they were stable, the rest would be pretty simple. He had some wood glue, and clamps, and sandpaper. He guessed that would be a good start. Tomorrow the sun was supposed to be out. Maybe he could lay all the pieces out in the sun over the empty, or almost empty water trough back there by the barn. He knew those boards and legs would have to be good and dry before he could do much with them. Who knows how deep the rot might be? Maud was over eighty, he figured, so if that table had been in the house when her parents lived there, it was some old table. And for sure, it had laid in that barn for a good many years. He picked up his book. Nothing more to be done today.

Days passed. The wood dried out and he carried it all back to his worktable, laying it out the way it had to go back together. He went over to the shelves where he kept his brushes, some for scrubbing, some for painting, and some for varnishing and picked up one with stiff bristles to get started at cleaning the wood. More days passed as he scrubbed the legs, a little harder because dirt seemed to just want to collect and solidify in the narrow grooves that ran vertically around the legs. Then all the crevices where the tabletop went together, the corners and angles where the mechanism to open and close the top, where leaves could be inserted all held old food, he surmised as he went back to the shelf and pulled out the long knife he had made himself and used for such scraping.

More days passed and more dirt fell away, piling up at his feet in little black mountains, mountains that he never noticed, only tracked out at the end of each workday, never noticing either how the grass wiped his shoes clean before he trekked up the back porch steps into the kitchen.

She always asked the same thing every night when he came in, “How’s it coming?” and he always answered, “Coming along, Coming along.”

He asked her for a strainer pad, one of the many they repurposed when the cows finally left, and there was no more milk to strain. She pulled a short pile out of the dressing stand in the bathroom and handed them to him. He never heard her ask what he would be doing with them, his mind already out in the shop where he would wipe every piece clean before he started sanding them.

The sanding was a mindless sort of work, slide the paper down and back up, down and back, all the while careful not to put too much pressure on the gritty paper, just enough to loosen and finally remove all the bits that hid the silky smooth surface underneath. More days passed as he sanded the leaves, the two drop-down semi-circles, the center halves, and then the harder part, the legs with all their grooves. Days turned into weeks, as he dug up the garden, laying the potatoes out to dry on the back porch, the last of the tomatoes, and then the beans. He helped her shuck the shell beans and the butter beans, always had, always will he figured, so the sanding slowed down a bit. But the day came, when he wiped all the pieces one last time, knowing it was time to start the varnishing.

He walked in that day, early fall it was, and pulled the chain for the light over his work table. He walked over closer and appraised his work, thinking only that it looked pretty good, better than that day when he looked at when it was just that pile of blackened, musty pieces of junk wood.

He half-turned and pulled down the brush he last used when he varnished that reproduction he had built for the Collinses. He swiped away on his pants any cobwebs or dust that might have found their way onto the bristle. Then he popped the varnish can open with a screwdriver and set to work, the broad flat pieces first, then the legs. He knew it would take another day for the varnish to dry, and as he looked out the door, was glad for the clear sky, the early nip of fall.

Two weeks passed, varnish, give it a day or more, as needed to dry, fine sanding to smooth away any stray air bubbles or anything else that marred the satin finish, varnish, dry, sand, varnish, dry, and sand.

More than a month had slipped through his hands as they caressed the wood, sanded and varnished it, as he cut and shaped two more leaves to replace the ones too stained to varnish. Today was the day it should be done, and a part of him was already lonely for the fine oak he had grown to love.

He put it together, all the pieces at home finally where they belonged, and he half-pulled, half-carried it over the threshold out of the barn, allowing the sun to gleam off the finish. He didn’t know she had watched him that morning. He didn’t know she was anxious to see it, to place it there under the windows on the back porch. They hadn’t talked about where it would go, but it just made sense to put it there. Then they could put the tomatoes and potatoes on it to dry and just thinking about that made her back feel better.

She watched him roll it down the driveway, thankful for the dry spell so the rolling was easier. She watched him pull and push it through the low grass over to the steps wondering what was going to happen then. She knew oak was heavy, and he couldn’t just carry the thing up those steps, no matter how few they were.

A few minutes later, the Smiths pulled in, and though she stayed in the house, she watched as the two older Smith boys and the two men hefted the table up the steps and rolled it into place there under the windows. She listened at the open screen door and heard Ted say they just stopped by to see how things were but had to be on the way and nice table Jesse. It was a nice table, she allowed as she watched Jesse cover it with a piece of plastic from the pile under the last of the potatoes. It was a nice, and the words came to her of a sudden, transformed table.

Meanwhile, years passed, and it was time for us to move. As newly-weds, we didn’t have much, and when she asked me if I would like that old table on the back porch, I said yes. How could I know as barely more than a teenager, that over fifty years later, it would still be the center of my dining room, holding more than thousands of meals and thousands of memories? It would hold my heart too, and I would always see his hands wiping the last specks of dust off from it just before he rolled it out of the shop, the one where he had milked cows before they left too.

2 thoughts on “Just an Old Table”