Chapter 6: A Surprise at Mass

John finished the milkin’, a pleasant hummin’ fillin’ the small space. He liked the peace 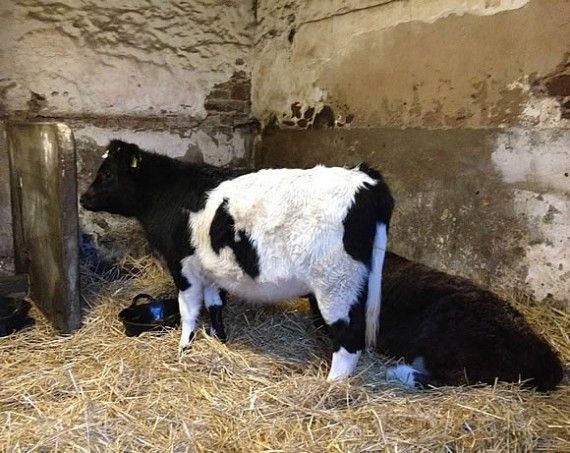 and quiet of milkin’, always a place for thinkin’ since the cows niver had ennathin’ much to say. Of a sudden it came to him, as he thought over the last months and the harvest or lack of much of one, Christmas was acomin’ and Johannah had said nothin’ about it. Sure and there wasna much to celebrate where the taties were concerned, but for all that, John reviewed how blessed they was. The bairns had made it through the sickness and now, Margaret, his big girl would be comin’ home for Christmas.

“Johannah,” he bellered, pushin the door open, his hands full of milk and eggs, “It’s soon to be Christmas now. Didja forget it, didja?” He crossed the room settin’ the pail of milk and the three eggs on the sideboard.

Continuin’ as if he hadn’t asked the question, “Don’t we have work to do to ready things? Why, whose a goin’ ta whitewash the outhouse, and sure and there’s cleanin’ ta do, and have ye made the Christmas cake now? I know that takes a long while to be makin’ its flavor.”

“John, I’m not feelin’ so fine now, not much like Christmas, I am. So we clean a bit and we put a candle in the winda, but John tell me how we’re goin’ to set a fine meal and tell me what we’re a goin’ to give the wee ones?” and turning her back to him, she poured the milk from the bucket to a clean bowl beside it to let the cream rise.

“Why, you and the bairns can clean inside, and I’ll be whitewashin’ the outside, and the bairns can find some holly. Holly won’t cost us a pence cause I saw a great lot of it up the hill tucked in among the hawthorn trees along the hedge.” He hesitated. “I’ve a few pence laid by. Sure and I will be bringin’ home the Christmas.” Before Johannah could rain enna further on his parade, John added, “I know t’will be different. But the baby Jesus came home to a stable, and we’ve more than that. For the bairns’ sake, we canna forget the Christmas. And our Maggie will be comin’ home for the day. We canna forget our Maggie. They’ll  all be expecting summat.”

“Ah, be off wid ye now. Mebbe ye might be findin’ a Christmas box in the village, but if ye find notin’ else, bring back a bit a flour, some tea and a packet of raisins. I’ll be makin’ a loaf of raisin bread for the Holy Family, and t’will make a fine breakfast afore we go to Mass, the mornin’. And don’t be after forgettin’ to check the post. Mebbe we’ll have sommat from Amerikay. Mebbe Uncle Billie will be rememberin’ us.”

It came to him what started this discussion, “And I’ll be askin’ again, I will, did ye make a wee Christmas pudding?”

“Now ye must not be after spoilin’ any surprises that might be makin’ their way here. Be off wid ye now,“ and a smile crept into her eyes while her hands pushed John toward the door.

“Ah, yer a good lass, ye are,” John bent and whispered the sweet words into Johannah’s ear just before he buttoned his vest back up, and before he headed down the road to Moyne, a hopin’ and prayin’ for just a wee Christmas box from the mercantile. He had always taken his business to Rayburn’s mercantile, and Rayburn had always favored his regular customers with a Christmas box  every other year.

The days passed and every inch of the cottage was cleaned. The bed clothes and the people clothes were washed, and somehow Johannah made a loaf of raisin and caraway seed bread to be left out for the Holy Family Christmas eve. Since they had no Marys in the house, Bridget was carried to the high windows to place the candles to shine the way clear for Joseph, Mary and the baby Jesus to find their way.

Just before the children were off to bed, John made a point of showing them how he was leavin’ the door latch open and raisin’ a great fire in the fire place. A poor house it was that invited the holy visitors to a cold welcome.

Still, the fire burned down and the air was chilly when all in the house were roused by the sharp call of the cow horn summonin’ the church folk to early mass.  Patrick and Timothy and Bridget pulled their clothes on quick as a wink. Eager they were to see if there was some of the raisin cake left, and sure enough, there was. Johannah parceled it out, each one gettin’ a bit with their cuppa buttermilk, and they hurried down the lane to mass, the boys racing ahead, Bridget trying her best to catch up with them. John and Johannah followed the footprints the children traced in the fresh snow, a laugh finding its way out to sing its own way down the path.

Every window in the church, all the tables and even on the doors, red ribbons and

the shiny green sprigs of holly glowed in the light of candles. The bairns scarcely heard the homily so entranced they were with the fragrance of the greens, the candles and the incense. And when the priest took to prayin’, they bowed their heads with all the rest of the faithful, peekin’ once the while, until at last it was all over. The big lads and lassies, and their mams walked ever so slowly by the manger, one hand reachin’ in always for a wisp of straw borrowed for good luck in the year to come.

Then to their great astonishment, Maggie jumped from behind the great door as they straggled out the church. “It’s our Maggie, our Maggie be here,” the bairns cried out, and John and Johannah hurried down the narrow aisle to grab up their big girl, her long black hair a swirl in the air as John swung her about.

“Her ladyship said I could come home for Christmas, she did,” looking into her da’s sparklin’ blue eyes.”She said I could stay til Women’s Christmas, two whole weeks, she did. She said, ‘they would be goin’ to her parents’ house in Cashel, so ye should enjoy a holiday with your family,’ she said. And here I am.” And with that pronouncement, Maggie wiggled loose from her da’s embrace and hugged her mam before she bent and wrapped her arms about her brothers and wee sister.

Once again, John and Johannah hugged their half-grown lassie, as though to make sure she really was there, before they sent all the children ahead. They knew their time to talk with Maggie would come, later the day, when the feastin’ was done.

One thought on “Chapter 6: A Surprise at Mass”