“They came for them, them at the manor house, didn’t they? Finally there’s a few taties to be et and we have to watch them go off the land to some other man’s bairns. There’s grain to make flour and we must, as we always must, watch it to be loaded onto wagons to go off to make fine bread for someone else’s family,” Johannah’s voice growin’ louder with those final words.

“Hush, hush,” John warned her, tryin’ to keep his own voice quiet, the children sleepin’ scarcely feet away, all of them in a semi-circle on the clay floor this damp cold night, a cold out of time, like the winter cold, only it was not winter yet. He and Johannah watched as the bairns squirmed under their woolen covers, from the feather beds they had dragged from the loft and tryin’ to get as close to the turf fire as they could widout bein’ burned. At least he hoped they were sleepin’ because when they were asleep, they’d not feel the hunger that plagued them, whether it was in their bellies or in their heads. “Hush, let the bairns sleep.”

“But look about you, John. Just look about you. Once yer family owned the land, and now, we are prisoners to the land. Once yer family, my family, lived in the fine houses. Look…at…them. I want ye to look at them, there over the hedge, lights shinin’ from the windows. It should be us over there. But for the injustice of it all, but for the English, it would still be ourn.”

“Johannah, my beautiful Johannah, all that is in the past. We canna change it.” He pulled her close, holdin’ her tight to his chest. “I’m doin’ the best I can, scourin’ the fields for sommat to eat. I know, the chickens are all but gone. I know the sheep are gone. But we do have the two cows, a goose or two, and two young pigs and the old sow. You can sell butter and make fine buttermilk. I’ve a small field of me own barley as well as the turnips and cabbages. That’s more than a lot of our neighbors can do,” he reminded her. “I can see with me own eyes the state of things. So,” and his own voice had risen a bit, and grown harsher even in its whisper, “I know how bad it is.”

“And what’ll ye do about it now? Before we end up in the poorhouse? Ye know that will be the end of us. The end of this Brennan family. They won’t let us stay together. They won’t. They’ll take the bairns away and put them in one place, and ye and me, we won’t even be seein’ them.”

She continued, “Ye might not starve to death in the poorhouse, but ye don’t live there either. Ye heard what they did over in County Clare, drivin’ the people right out of 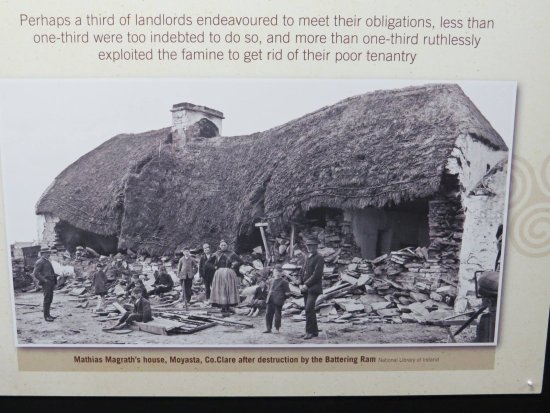 their homes. And if they wouldn’a go, they tumbled their houses down, the bailiffs hirin’ gangs of blackguards to be just pullin’ their cottages apart, so they couldn’a return. All because they couldn’a pay their rent. But how could they?” and tears began to fall onto the warm floor sending up little puffs of steam there in front of the fireplace, still bright with the embers of the turf fire.

These were not new words to hang in the air in front of the fire and the chimney to let the smoke out, and the words, thought John as he traced a spark up the chimney, with the smoke. But as sure as he knew the horrors of his family being separated in the poorhouse, there was more to be feared. Only last week, after mass, he had heard what happened to the children at the poorhouse. They took them away from their parents, they did, from the families over in the next allotment. It was true, there was food at the poorhouse. Poor food and meager, but they had sommat to eat there. So if it came to that, his children would eat. His hand went once again to his pocket where the prayers lay wrapped around the beads of his father’s rosary.

But, they would not be a family. He knew the English separated families, and should ye  see and greet your child in the workhouse, take the weepin’ bairn into yer arms, ye and the wee one would be punished. Those were the very words he heard. He did not know how he could see his little laddies Timothy and Patrick, his girlie Bridget, and not cover the children with love. But he also did not know how he could make the children suffer to warm his own heart.

He had heard too, like everyone else in the village about the two little ones in the poor-house this last week. An 11-year-old girl named Peggy, only a few weeks ago, had been given the “fist,” been kicked and thrown to the ground. When the master brought the mother to the child, tellin’ her only that the child wanted her, the child was dead. And then there was the wee boy, kicked on his back and about his head. His parents were told he had bronchitis, but bronchitis didna look like that.

Of course they, the English or those they hired, said it was all a story, the truth bent to make the poorhouse look bad, the English look bad, as though they could look much worse. But a parent would not lie about a thing like that, John thought, would not make up a story about being told his child had bronchitis or fell down while doin’ his work when his child showed the marks of a beatin’. A parent would not say that he was told his child was callin’ for him, and by the time he could get there, the bairn had died. Unless it was the truth.

No, John believed the story, and no matter how hungry his little ones were, he’d die sooner than let his family be taken there. At least that is what he told himself now, every day when he looked into their pale and hungry faces awaitin’ for the harvest, prayin’  to the Virgin for a good late harvest in a few weeks.

Chapter 4   from Leaving Ireland written by Carol Brennan King, a daughter of Ireland   John and Johannah were my greatgreatgrandparents.

2 thoughts on “Chapter 4: The New Stories Grow The More Bitter”