All the way back to the cottage, John scoured the fields and called until his troat dried up and squeaked only useless sounds, and none that would be after carryin’ far.

“Patrick, Timothy! Patrick, Timothy, answer me!” Hot and cold pursuing him, anger and fear. Finally, slowin’ his pace as the cottage came into view, and still no boys, fear won. The Death had taken up residence all over Ireland, John thought, seein’ clearly the dark figger, a skeleton cloaked in black rags and walkin’ about, death streamin’ from his bony hands. So far, John told himself, though the dyin’ had come close, it had not touched his family, not his own bairns nor those of his brothers nor sister. “Please Jesus,” he let the prayer float into the sky and added Mary and Joseph to his petition, “not me boys, not now,” as if there would be a day they might agree on.

Just then Johannah looked out the door and ran to meet him. “Did ye find them? Andrew’s Mary came over after you left, chasing after her boy Philip. She said she saw him wid our two down the road this morning, but she canna’ find any of them now. Ye don’t think,” and she looked into John’s face trying to read words he could not say, notin’ how hard he was a breathin’, and then said her own small words to help him, ”the shots and all?”

“No, I don’t think they were wid those foolish lads that thought they could take on the English. I met one of those big boys running away from the Red Coats and their big guns. Scared he was, but not shot, that one ennaway. When I pressed him about our lads, he allowed as they would never take the bairns wid them. The little uns must be somewhere else.”

“Mary said they’re selling Indian corn in town, selling or giving it away. I don’t know. Mebbe the boys went to see what that was about. Mebbe they thought they might get sommat more to fill their bellies.”

John whirled about, spraying beads of sweat into Johannah’s face. “Don’t ye worry,” he called already on his way back toward Moyne. “I’ll find the bairns, and ye can be sure they’ll not be going into the village widout us ever again.”

With the promise hanging in the air between them, his steps whipped the drying mud in the road into its own kind of brown smoke hiding him as he ran once again toward the gray-black threads of smoke hanging over the village. He understood about hunger and findin’ free food and feared how appealing the ignorant bairns might feel about corn. They knew naught about corn. They’d never in their lives et corn. “Why,” John whispered to no one at all, “Johannah knows naught about even cooking the stuff. Maybe they eat it in America, but people do not eat it here,” never dreaming of what the corn from America might mean to him one day.

More of the big boys ran by him, not stopping once for a hello, and he thought that a good sign. Able to run must be a good sign. Mebbe they just got scart and nobody kilt. As he closed in on the village, he realized the smoke was coming to his left, out where the grog house stood, and he was sure any soup kitchen or corn market or whatever it was, if they had for sure opened one up, would not be in that part of town. More likely over by the church, and he turned to his right, circling the village behind the cottages and the storefronts.

He paced himself then, walking more slowly so as not to draw attention to himself until he saw a cloud of darkness, spilling out from between two buildings. As he grew closer, he saw it for what it was, people wrapped in rags, filthy rags, families in some kind of queue. It dawned on him that this must be where they were giving out the corn or soup or whatever it was. Of course it was, he chided himself. They built the 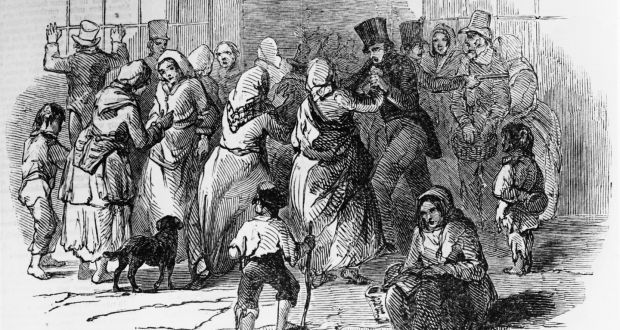 Quaker meeting place on the High Street, and they would be the sort who would be givin’ away food. He had heard good things about the Quakers, Irish and American.

At that moment a Red Coat came running out from the alley chasing boys, three wee lads, and he realized the lot of them were running toward him. The boys cryin’, screamin’ and yellin’ and the Red Coat yellin’ too, warnin’ the lads that if they ever showed their face in Moyne again, it’d be the workhouse for sure. That much John could make out.

The boys recognized him but ran past him widout a word. When the Red Coat caught up with him, John’s blood turned cold. “Ye see those little thieves,” the soldier said. “They were trying to get some corn, but they had no family with them. How do I know if their father hasn’t gotten corn already. I’ve lads of me own, so I won’t chase them any longer. But ye,” and the soldier pushed his finger into the middle of John’s chest. “Ye’d best be findin’ those boys and warnin’ them. The next time they try stealin’ someone else’s corn will be the last time.” The soldier swept away back toward the crowd. John retraced his own footsteps to the main road into town followin’ it back to his own cottage, all the while watchin’ for the boys and fingerin’ his pocket rosary, thankin’ the Blessed Virgin the bairns were alive and prayin’ they’d be makin it home before they got into any more trouble.

by Carol Brennan King, a daughter of Ireland

Ireland slide from Peel, Ireland and the Corn Laws / http://www.educationformum.co.uk